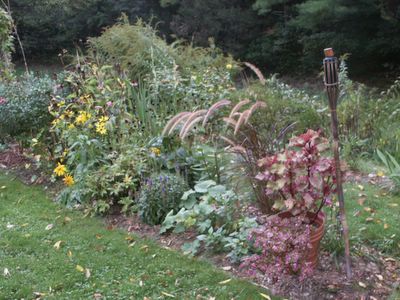 Not bad for October. (No frost yet!)

The above photo shows part of my double border (photo taken 10/7/05). Obviously, the plants are past their peak. But note that Rudbeckia 'Irish Eyes' (near left) is still looking relatively fresh, while Rudbeckia 'Goldsturm' (just to the right of 'Irish Eyes') is now basically just brown "cones" with all petals fallen or drooping straight downward. Now, 'Goldsturm' is a great plant, and I like its slightly golden tone (and brown centers) slightly more than the purer yellow petals and greenish centers of 'Irish Eyes,' but the 'Irish Eyes' habit of blooming at least three weeks later into the fall is worth something.

Also, since everyone has 'Goldsturm,' I wouldn't want to overuse that variety. Fortunately the two plants go together well, so I'll keep 'em both. Another good thing about 'Irish Eyes' (and Rudbeckia and composites in general) is that it can flower well even in its first year from seed, which is unusual at least for noncomposite perennials. I started them indoors on 2/27/05 and planted out on 4/26/05, with no coddling.
Posted by DWPittelli at 10:35 PM No comments: