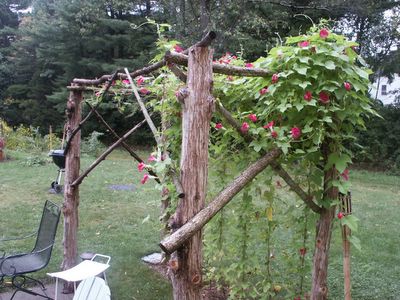 My trellis, with Ipomeia 'Scarlet O'Hara.'

Head in the Sun, Roots in the Shade

It’s not often that gardening makes me feel stupid.

Killing plants doesn’t. Plants die. And generally when I’ve killed them I had recognized that I was taking a risk, such as putting a silver-leaved plant in moisture-retentive soil in part shade, because I liked the way it looked there more than any other available spot. (On that score, Lychnis coronaria is far more tolerant of shade and moisture than is Lavandula angustifolia ‘Munstead.’)

But last week, I found myself wondering how I could possibly have failed to understand the needs of vines. It’s often said of Clematis, among many vines, that they like their “head in the sun and roots in the shade.” This would seem to fit their natural orientation climbing over shrubs or trees. But isn’t the same true of the shrubs or trees, and even herbaceous border plants, as well?

These plants also generally have their heads in the sun, and their roots are also shaded, by themselves and, in a closely planted bed, their neighbors, yet something different must be happening with vines to lead to the “head in the sun and roots in the shade” prescription – assuming it isn’t a bunch of bovine feces.

Although I’m not arrogant enough to think that such a common prescription could be entirely wrong, the bovine feces hypothesis is always worth consideration. For one thing, roots clearly don’t sense the sunlight itself. They sense temperature and moisture levels. Naturally, a good layer of mulch can, as much as shade from above-ground growth, keep the sun’s rays from raising soil temperatures and evaporating near-surface moisture. Dry soil will be hotter than moist soil. And the application of (cold) water from ground sources and deep reservoirs (i.e., most any private or municipal water supply) will directly and rapidly cool an overly warm bed of soil.

Of course, the questions remain whether one can add sufficient water to cool the soil, without damaging a plant not adapted to bogs, or whether soil in New England will ever be both quite wet and too hot for a “normal” plant – or just about any plant, given that the silver-toned Mediterranean plants which like dry conditions are also resistant to any heat that New England can dish out.

Getting back to my “D’oh!” moment of last week. The morning glory (Ipomeia ‘Scarlet O’Hara’) vines have run well over the top of my trellis (previous post). Whenever I’ve watered, I’ve see that they’re dry (by poking a finger through the mulch) and added as much water to them as I do to just about any of my herbaceous plants (10 seconds from a handheld shower head nozzle at a non-blasting but considerable flow). This seems like a lot of water, given that the 10 plants are a foot apart and seem to share each others’ water, are well mulched with cedar chips, are clear overhead to rain water, and are really only getting half sun. But while the plants have grown tall, and flowered reasonably well, they’ve still always seemed a bit peaked. So this last time, I checked the soil again a few minutes after I watered. Bone dry! I repeated this process 6 times (pausing for soak-in) before achieving, I think, the average moisture level my other plants would get from one pass.

Many vines like sun. And unlike most sun-loving plants, perhaps all of them will benefit from shading of the soil around their roots. But the crystalline, pure truth of the vine’s essence and needs is that it sucks up a lot of water because it is so tall and skinny and covered with foliage along its height. In contrast, trees and tall self-standing perennials keep most of their foliage on the top and side edges of the volume they “fill.” (Interior foliage, if it is not sloughed off, is largely shaded.) As such, their water needs do not go up linearly (or much at all) with their height.

Posted by DWPittelli at 10:07 PM No comments: