The new US Dept of Education data on university graduates' incomes and debt levels illustrate some enormous differences between programs, and particularly problems with the For-profit sector (red dots below).  For the majority of students who have any federal loans or grants, the median debt level and income in the first calendar year after graduation are shown here (click on graph for better resolution): 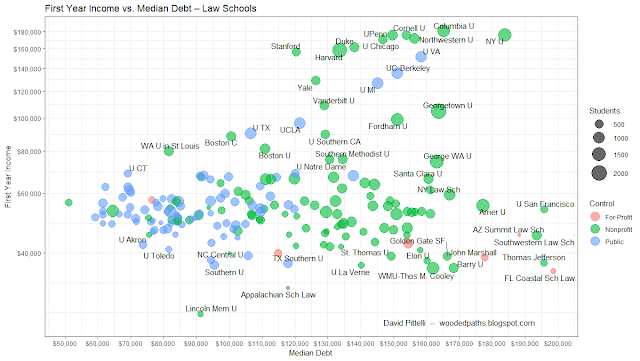 There is almost a bifurcated market for law schools.  Income in the first calendar year after graduation is closely correlated with the average LSAT scores for the schools' graduates (shown as color in the next graph).  Debt is high at a few elite law schools, whose graduates are well compensated for taking on this debt, as well as some of the least elite schools, especially the few for-profits, whose graduates see little or no economic advantage for having gone to law school. To get a better handle on how LSAT scores relate to income out of law school, the next graph shows LSAT scores as the left-right axis (and average debt is shown as color).  Here we can see exactly how dependent first-year income is on the average LSAT score of the schools' students.  Bottom-line: If you can't get into a top-20 (or so) law school, go to a state school and consider law like an advanced degree in English Literature or History -- do it only if you love it and don't need the salary bump. 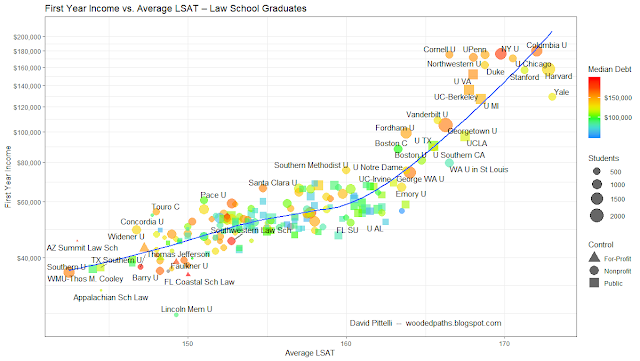 Note that deviations above or below the trend line may be for varying reasons, good and bad.  For example, Harvard and Yale are the upper right of the graph, but somewhat below the trend line because some of their strongest graduates start their law careers by clerking for a judge, which is prestigious and often leads to a lucrative career, but is not itself very highly paid.

Posted by DWPittelli at 7:47 AM No comments: