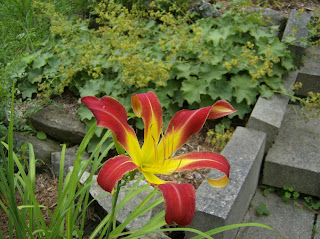 A rather interesting daylily (Hemerocallis) fronts some ladies' mantle (Alchemilla mollis) on my rocky slope. 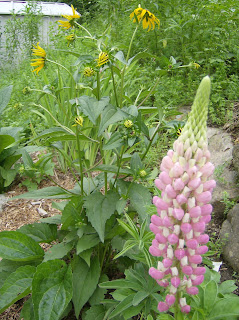 Lupine fronts unfurling Rudbeckia 'Goldsturm.' This photo was taken today. It's not often a perennial Lupine reblooms (the first bloom peaked around 6/30/07). I did dead-head it quickly after its first flower spike was finished, but it's probably only because it's a young (first-year) plant that the rebloom occurred. (I got it at the North Adams Garden Club sale this spring.)
Posted by DWPittelli at 8:31 PM 4 comments:

Best Chicken Ever Goes Down

Sadly, I must report that yesterday as I was driving down Summer Street in , I saw that the Jolly Butcher shop has signs in the window saying "We Are Now Permanently Closed." So another tasty establishment has gone down the tubes. Their pressure-fried chicken was beyond compare (OK, it was a bit like KFC, if KFC used better chicken and had consistent quality control). They also had good raw meat. (See "It’s all about the Ribeye.") Apparently, they just didn't have enough customers.

The problem with depressed retail in Adams and is of course a lot broader than one shop or even retail in general. And for Summer Street, the relative absence of through-traffic and of out-of-towners adds to the difficulties. Since our main street (actually named Park Street, aka route 8), while busier, also has empty store-fronts, I'd think the longer run solution for this town is for most of the Summer Street shops to move to Park. Of course, if I owned real estate on Summer Street I'd probably feel differently. Hopefully, the new Topia will entice some new customers and businesses to Park regardless.

I haven't had any connection to the retail business since I was in college. And I can't think of any retail concept crying out for a presence here. Except possibly for a bike shop with espresso and ice cream, since the Ashuwillticook ends right at the center of . (However, there is a good bike/outdoors shop a couple miles away.)

Apart from a casino, does anyone have a retail wish, or an idea for something they think could do well in Adams or ? 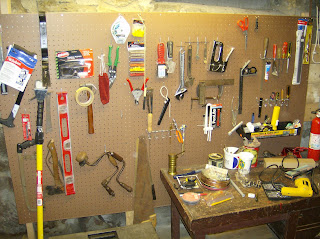 So as soon as I get a couple days off from all responsibilities (i.e., my children), it starts to rain. A lot of projects have been building up, because it’s been a pain in the butt to find most of my more esoteric tools and hardware parts. So after 12 months in my Adams House (oddly, that’s the name also of the dorm complex I lived in for 3 years, 20 years ago – must have been fate that sent me here), I finally got around to organizing my tools.

Naturally, this meant a peg board, as I had in my last () house. At Greenberg’s an 8’ x 11’ piece of 1/8th inch peg board was $11. Add in about $12 for peg board hooks and such (most of which I already owned), some lumber (mostly scraps I had), and a half-dozen hours of labor, and here’s the result so far. (I took perhaps 90 minutes to cut and set up the board and lumber, the rest of the time to go through cardboard boxes, tubs and tool boxes, peg things to the board, shelve larger items, and perhaps most important, hook up some old yard-sale speakers to an equally ancient amp, so the iPod and CD Boombox can be properly cranked with Woodstock-era rock and roll music.)

Now I can instantly find my plumber’s snake (for the slow shower drain) and my small screwdrivers (to fix a lamp cord-switch), and all my other projects will go much more quickly. (Just 10 minutes for the shower drain which has been plaguing me and my understanding wife for months.)

Do any of you have any exciting rainy day projects, done or as yet undone, to share?

At the Independence Day parade in Williamstown, I ran into a father of a girl who will be in my daughter’s kindergarten class. He noted that it’s been a great year for his garden. It hadn’t occurred to me until just then, in part because I’ve only had my garden here for 11 months, but yes, it has. Almost everything is growing strongly and flowering well. And apart from a little powdery mildew on some of my goldenrod, I have had no problem with fungal or other diseases. Of course, the weeds are also vigorous, there have been insects here and there eating things, and the rodents haven’t let up on their depredations. But you can’t have everything.

Naturally, if this phenomenon (i.e., a great year) is real, and not a figment of our imaginations, it must be due to some aspect of the weather. While we’ve felt a bit sticky from humidity, it seems to me that unlike last year, we haven’t had much very hot weather. (I understand that right around 86 degrees F is the point where most plants stop growing and start suffering.) We also have had plenty of rain, fairly regularly, but not so much overcast weather that things are suffering from a lack of sun. 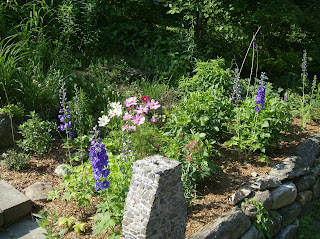 Here’s a flower bed of mine a week ago (6/26/07). You may note Delphinium and Cosmos in bloom, and a few flowers left on Centranthus ruber ‘Coccineus’ and Lupinus (front center and back right). Not very floriferous, I’ll concede, but: It’s the first year for all of these perennials; the Potentilla fruticosa ‘Pink Beauty’ shrub (reddish twigs behind and to right of Cosmos) can’t be expected to be doing any more in its first season (it was supposed to be a “trade gallon” but arrived as a bare-root -- at least Wayside Gardens did give me a half-back credit when I complained); and the area has a bunch of plants scheduled to start blooming by August (four big Dahlia plants around the middle right, Chrysanthemums at left, Liatris spicata ‘Kobold’ just to left of Cosmos, Solidago / goldenrod and Hemerocallis / daylily at back).

Does anyone else in the area have any other theory about the conditions this year, or have anything to report on growth or health of their plants?