Global warming is real, but the journalists and politicians warning us about the dangers of climate change are as prone to making false claims as are their opponents ("skeptics").  Most recently, we saw this with respect to tornadoes.

On December 10-11, 2021, several powerful tornadoes hit the central United States, reportedly making for "the deadliest December tornado outbreak in United States history".  The next day, Deanne Criswell, head of the Federal Emergency Management Agency (FEMA), said that "This is going to be our new normal.  The effects we are seeing of climate change are the crisis of our generation."  President Biden echoed her claims.

But not every weather disaster is about anthropogenic climate change.  It's possible that global warming could affect tornadoes, but the data is telling us that strong tornadoes are actually declining over the last half century.  If global warming has been affecting the number or strength of tornadoes, then it appears to be weakening them.

We have had good data on tornado counts and strength since about 1970, and it is an uncontestable fact that the official and scientific data we have shows that F2, F3, F4, and F5 tornadoes have all been decreasing over the last 50 years.  ("Strong" tornadoes are usually considered to be F3 or higher.) 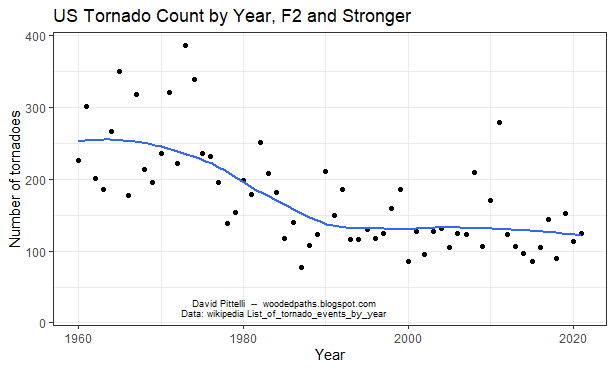 Only the weakest (FU, F0, and F1) tornadoes' count has gone up.  This is an artifact of increasingly good detection of weaker tornadoes.*  And even those weak tornadoes have gone down since peaking in 2004. 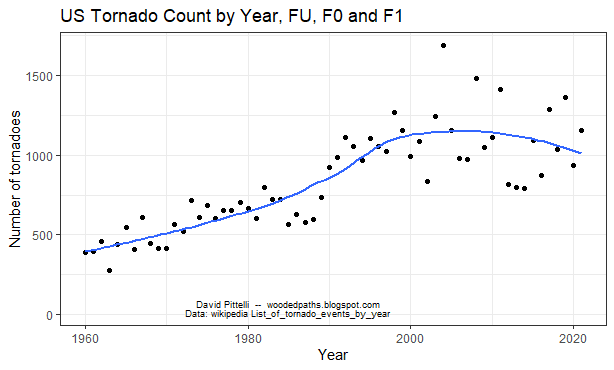 I find it rather shocking that demonstrably false claims on this matter are so broadly and credulously covered by the largest media sources.  I think that skepticism and corrections are avoided because few journalists want to be seen as doing anything to "fuel skepticism".  Ironically, this attitude ends up fueling skepticism.

* Note this article on improvements in tornado detection. 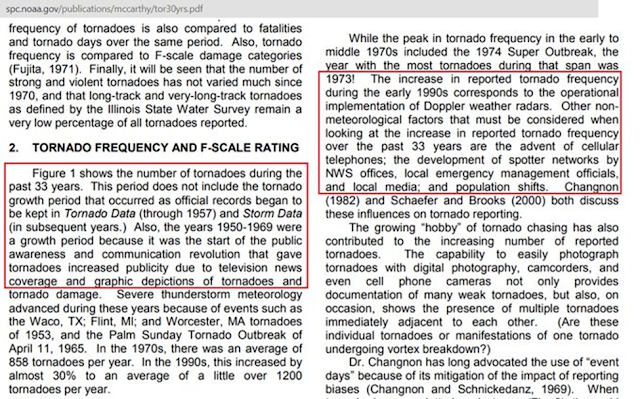 Posted by DWPittelli at 3:05 PM No comments: