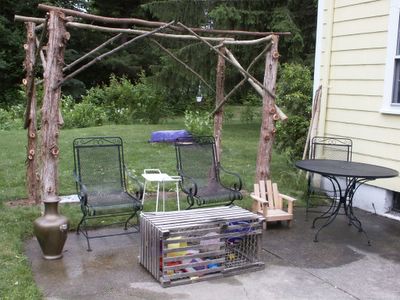 My newly completed trellis (details below).

I’ve been largely out of commission in the garden for the past two weeks, due to jury duty and personal matters. But on Saturday (June 18) I built this 7 foot tall by 9 foot wide rustic cedar trellis. It took all day, the process including cutting with a gasoline chainsaw and electric circular saw, digging, elevating and securing all pieces with stainless steel #10 2½” screws. (Tree felling and design had been done earlier.)

The upright posts are Juniperus virginiana (Eastern red cedar), with horizontal and diagonal stiffening pieces of the same wood or of hardwoods, as I didn’t have a lot of long, straight, smaller diameter cedar. The rear posts are set 12” in the ground, on top of 4” of rocks and sand, the remaining 12” hole then filled with 8” of sand and 4” of soil. I suspect the posts will last for 8 to 10 years, while some of the hardwood cross-pieces may have to be replaced in as little as 2 years due to rot. It’s not much work to replace cross-pieces one at a time; the difficult task is setting up posts and holding them upright while securing them.

I have yet to run vertical strings for the morning glories (Ipomeia ‘Scarlet O’Hara,’ visible in the center of the soil bed, and now just 1 foot tall) to climb, and I will also be adding some smaller pieces of wood, or horizontal wires, for various plants to climb, the exact use of which depends on what other plants I end up adding.

Given the yellow and white house, the existing morning glories, and my desire for roses, I think I’ll have to stick with red to orange or red to pink flowers.

I want to have at least one rose, given the site probably a climber like the red 7-petaled Altissimo, or the nonremontant red very double ‘Chevy Chase’, both of which Peter Schneider on Roses says are good choices for half shade. (This is an excellent book, probably the best of the “Burpee Expert Gardener” series; it consists of Schneider’s favorite 400 or so rose cultivars among the 1,400 he boasts of having grown, with many photographs and some broader cultural tips and information on classes of rose.)

For the other plants I am undecided. A clematis would be nice, especially a later bloomer that can be pruned in the spring with the rose.

Ideally, at least one of the plants will grow long and full enough to cover the top of the trellis and shade the chairs below from the mid-day sun behind them. And some broad-leaf evergreen foliage would be nice in the winter, although I think that would mean including a plant without blooms as flamboyant as rose or clematis, so I wouldn’t want to overdo the evergreens, or have to keep fighting to keep an invasive ivy off of my flowering plants.

Posted by DWPittelli at 12:15 AM No comments: 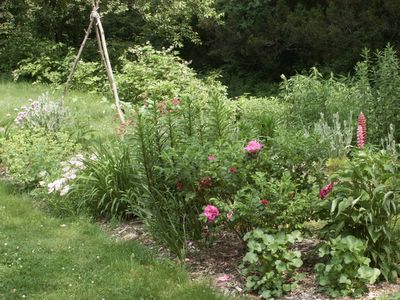 Blooming rugosa Moje Hammarberg, among other plants in my long bed (see text below).

Posted by DWPittelli at 11:08 PM No comments:

Moje Hammarberg and his neighbors

Here’s a section of the middle of my long bed, which is finally showing some promise for the season.

Near the right we see ‘Moje Hammarberg,’ whose first bloom opened 6/6/05. Its loosely double, bright saturated purplish-pink flowers are sweetly scented, and come early and throughout the season. (This year everything is running relatively late; I haven’t seen other cultivated roses blooming to date.) This rose grows 3 or 4 feet tall and at least as wide. Like most rugosas, its wrinkly leaves are extremely healthy, its stems are extremely prickly, it will have large hips, and it’s hardy down to Zone 3 or 4 (it was introduced in in 1931). Last year I wasn’t blown away by the number of its blooms, but that was its first season, and I purchased and planted it rather late (6/20/05, consequently it was just $10 outside the Building 19 on routes 27 and 9 – their non-rugosas were looking pretty sick by that time). The only care I gave it: planted in a well-dug bed, watered when droughty, and knocked off Japanese beetles (tools: a plastic spatula and a soapy pail of water). While powdery mildew was pervasive among nearby roses and brambles, this plant never showed a sign of it, or of any stress. I heartily recommend it, especially to gardeners who think roses are too difficult.

Next from the right: Narcissus leaves (dead-headed).

Middle: Lillium ‘’ is putting up quite a few big, healthy looking stalks. In my previous post I covered its scarlet lily beetle infestation. As it happens, since my one spraying of Pyrethrin, I have only seen 1 or 2 beetles per day, so I’m hoping my daily inspection and squashing regime will keep the plants healthy without resort to more radical measures.

To the left, behind a tuft of daylily foliage and the Lillium, Centranthus rubra (Jupiter’s Beard, aka Red Valerian, among other names). You can see the first small blooms just starting on top of the Centranthus. This plant handles extremes of temperature, soil and moisture – despite its Mediterranean origins and reputed preference for dry, alkaline conditions, it proved healthy and vigorous for me last year (while my Verbascum was putrefying), with a long season of bloom. Individually, its clusters of small flowers don’t compare to, say, roses, but the plant will soon be much more flamboyant than pictured here. I don’t know why it’s not more popular, unless it’s because it’s too easy to grow for bragging rights, and gets large and flops a bit on its neighbors – that doesn’t bother me if a plant is easy to shear back (no picky pruning regimen, prickly thorns or overly invasive roots). Centranthus is also available in lighter pinks and white. It is featured in the book Antique Flowers, by Katherine Whiteside (1988), a great source for discovering old-fashioned and relatively neglected species.

And to the left of the daylily foliage, a pale pink Oenothera (evening primrose). Or actually, a number of seedlings from the Oenothera, as there did not appear to be a returning (perennial) stalk. These beautiful pinkish mauve flowers appear to glow brighter-than-white in low light conditions, and despite the species' common name, appear throughout the day.And behind Oenothera: Alchemilla mollis (Lady's Mantle), and pink-flowering Allium (chive). All three of these plants are easy and healthy, although often reported to be somewhat invasive I have only found the Oenothera to be so, and its seedlings are pretty easy to identify and pull up if necessary (unlike some invasive plants which spread by runners). The chive is of course tasty with scrambled eggs.

Back Row near right: Lupines and Lychnis coronaria (rose campion, not yet flowering).