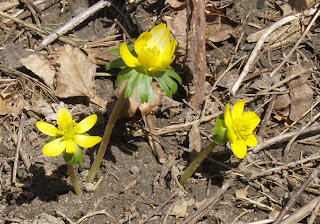 Posted by DWPittelli at 8:41 PM

I thought of getting a few winter aconites for my little woodland garden but for some reason I didn't. Maybe they reminded me of the buttercup which we have a lot of but seeing your photos, I may reconsider especially when the twinleafs do not seem to be coming up.

Eranthis are in the same family as the lowly buttercup (Ranunculaceae). Then again, so are the noble Clematis, Delphinium, Aquilegia, Anemone and Aconitum (not that Eranthis resembles any of them so much). At any rate, given their timing and boldness, I think Eranthis will make a great ground carpet once/if I have it in quantity.

An Iowa Garden had a couple of posts about Eranthis recently. He's growing some lovely and rare species {sigh}. Of the common ones I've planted, the ones that have been perennial are in varied situations - mostly at the edge of the woods and fairly dry in summer - but none of them have increased other than to make a slightly larger clump. Maybe I should try them again, deeper in the woods.

2/22/08
My little plant just appeared in my garden about 4 years ago. I do not know how it got there! I don't believe I missed it for the other 3 years we have lived in this house! My Eranthis blooms in February. I live in Northeastern Pa. It is blooming now, has been for a few days, and it has snowed twice. Lovely little plant under my weeping cherry tree. It is such a treat to go out in the snow and see a little patch of bright yellow and green!

I have planted hundreds of these little guys...not one has ever come up. Does anyone know why?

Some questions: Have you tried varied locations withing your property? Are the locations sunny in the early spring before deciduous trees leaf out? Are you planting them 1 inch deep? Does your soil have a fair amount of organic matter (humus or leaf mold) as is usually the case in light woods? Is the soil moist in winter and early spring? Do you live in a cold to temperate zone?

If your answers are all "yes," then I regret I have no other tip to help you. Even the late great Christopher Lloyd reported that Eranthis did not like him, failing after repeated plantings. He did not know what conditions led to this, while many others have had great success with the bulbs. He did believe that they do not like so much being dried out and planted in the fall, as most spring bulbs are traditionally moved, and that this would account for losses of perhaps half the bulbs.

You said that you did not know where to obtain these. I purchased mine from Springhill Nursery online. I found severall other places that also had them. I can not give any comments as yet. They are to be planted as soon as they arrive.

Do you know any store or online source that sells Winter Aconite, Eranthis hyemalis?

I've bought Eranthis hyemalis locally at a large garden center, in the fall bulb season. (Ward's Nursery, Great Barrington, MA). It see from a Google search that it is also available ("shipped for fall planting") from White Flower Farm.

There's a great section on Eranthis in Elizabeth Lawrence's book -Little Bulbs. She says they don't like to be out of the dirt long and don't like to dry out. I'm still trying to get some to peek through. John Scheeper's bulb company also offers them.