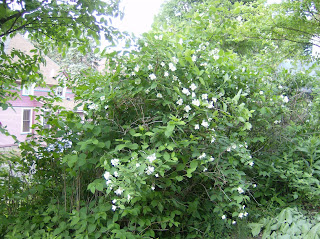 Having moved into a Victorian with some overgrown areas less than a year ago, I am still pleasantly surprised as formerly unknown or unnoticed plants have come into bloom. One side of my property is lined with a “hedge” – not a typical in-town sheared hedge of one or a few carefully chosen types of plant, but a hedge of the sort, composed of a mix of species, many of them sown by birds, that one would find along a small farm field. On Wednesday (6/6/07), fresh blooms led me to discover that much of this hedge consists of mock orange, or Philadelphus – overgrown, however, by more aggressive brambles and bush honeysuckle, and topped by dogwood trees (Cornus alternifolia).

Most Philadelphus grow up to about 10 feet tall and wide, but there are 4-foot cultivars. It does not generally get much respect for its appearance out of flower – it is rather like a smaller-caned lilac – and like the slightly earlier blooming lilac, its flowers are most prized for their scent. But I think they look pretty snappy. I wouldn’t have guessed that they are a good cut flower, but I had this spray in my house for two-and-a-half days before taking this photograph, and it has even opened additional buds since I picked it: 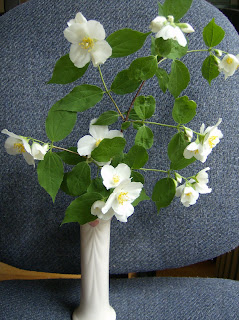 Philadelphus has a very pleasant scent, unfortunately not as strong with my bushes as with most of its many named cultivars. Naturally, a bigger vase with perhaps four such sprays would be more attractive and odiferous.

The fact that several of these bushes have survived and even flowered where they have is testimony to their adaptability and essential toughness. Mine did have black aphids on some young branch tips which were in more congested and shaded areas. Pruning out the affected tips and competing growth should open up the bush enough to reduce its suitability to the aphids.

Philadelphus are fairly vigorous cane-growers, reportedly easy to grow from cuttings throughout the summer. They can take hard pruning, and like Forsythia should have about a third of their older canes cut to the ground each year. This not having been done in over a decade, I have a lot of dead and/or crowded wood to remove, as you can see: 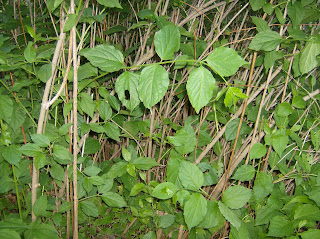