A Paean to Gold and Chartreuse

Mid-spring is here, and we can now take for granted the ubiquity of green leaves. But it wasn’t that long ago that brown twigs dominated the landscape, and even the scraggliest of spruces was a welcome sight in the garden. Most evergreens are needle-leaved, which limits the textures available to us in the winter, but of course there are some tough broad-leaved evergreens.

In colder climates such as my own zone 5, the role of the broad-leaved evergreen is most commonly filled by members of the Ericaceae, the heather family. These include the Rhododendron/azalea, Pieris/andromeda, Kalmia/mountain laurel, and Erica & Calluna/heath & heather. All can be quite beautiful, in or out of flower. But almost all of them must have acid soil, while a few tagged as “lime-tolerant” can really just handle neutral (pH 7) soil, lest they suffer from mineral deficiency, discoloration, slow growth, sickness and even death.

Most of the northeast has acid soil, but as I noted in an earlier post (“Should You Buy Shrubs At The Supermarket?”), the particular mountain ridge I live on (in Adams, MA) is made primarily of limestone, such as is most visible at the Specialty Minerals site on route 8, where the base of Mount Greylock is ground into products such as Tums.

If your soil is really mixed up with limestone particles, you can’t as a practical matter acidify it except by putting in a lot of new soil in a raised bed. But if you already have a Rhododendron, it couldn’t hurt to add an acidifying fertilizer such as Holly-Tone, and perhaps some peat moss, to the surface, then cover with mulch. (Rhododendrons have very shallow roots, so you should not try to dig things in.)

With the Ericaceae impractical for many of us, the preeminent broad-leaved evergreen in this area is Euonymus fortunei, the wintercreeper, especially in a few variegated cultivars such as ‘Silver Queen’ and the similar ‘Emerald Gaiety’ – which have white leaf-edges; and also ‘Emerald ‘n Gold’ – which has golden leaf edges. Many people around here seem to have one of these variegated evergreens, especially the former white/silver types.

I am not generally a fan of variegated cultivars of garden plants, because most of them have reduced vigor, look sickly in the summer, and are very picky about getting enough sun (since they have reduced chlorophyll) but not too much sun (lest their pale portions burn). But these Euonymus fortunei cultivars usually look very healthy, and being evergreen bushes they don’t have to start from nothing each year, but can defend their territory quite well once they are established. The white/silver ones especially can look magnificent at all seasons, provided they are given room to spread naturally.

The variegation of ‘Emerald ‘n Gold’ is claimed to turn an attractive pinkish in the winter, but most I have been watching actually spent much of the late winter and early spring with a lot of their leaves looking like sickly pink-brown winter-kill. Right now, however, all signs of winter damage are gone, and the shrubs’ leaf edges are an especially bright chartreuse, as in this picture: 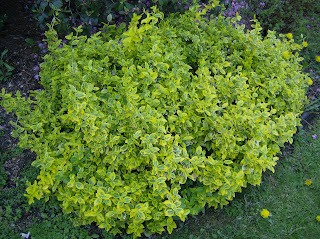 Unfortunately, I think that most of these bushes aren’t used to best effect. First, these rather slow-growing shrubs naturally have a beautiful form, with branches jutting out here and there in an informal, yet clearly noble, display. But most were placed where they cannot spread to their full size (perhaps 7 feet wide, but probably not for more than a decade after planting), and so eventually they are cut back to relatively smooth-surfaced globular shapes, often with hedging shears. Second, these bushes’ unusual color, especially in spring, calls out for some more dramatic contrast than green & gold versus just green or green & silver. How about some red, mauve or blue late tulips, early peonies, roses or Dianthus, as in the picture in this link from "Kachinagirl"? (I’m not allowed to actually show the photo here.)

By the way, I believe that the mystery shrub with no leaves in “What Would You Do With This Shrub” (April 18) is a Spiraea japonica or Spiraea x bumalda hybrid, such as the popular ‘Anthony Waterer’ cultivar, which will have flattened bunches of pink flowers in another month. Here it is in a photo taken a week ago: 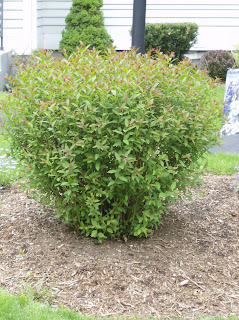 It looks remarkably good for having been such a congested bunch of sticks a month earlier. Such a bush would be: if a Forsythia, or most other genuses, bare-legged; and if a Hydrangea, at least 50% dead wood.

Hi DW, Very interesting about the euonymus. I find them to be very hardy and beautiful. I have the white/silver type in a shady area and one in a sunny area and they both flourish. What you forgot to mention is that rabbits and deer love them. Ours were chewed nearly to the ground but have come back rapidly. I've noticed the pinkish color of the leaves over some winters - but only on the plants in the sunny spots. I really like the picture of the "Emerald 'n Gold" you've got and the color partners you suggest would be quite pretty. I also agree that too many shrubs are tortured into unnatural shapes by pruning and look much nicer when left to their own devices. Too bad I live so far away - your lecture sounds quite interesting. Thanks, Alyssa

My mother's husband had his 'Silver Queen' munched almost to the ground by deer. It quickly came back looking better than ever. That said, I agree that a heavily deer-infested area is not ideal for the plant. Not that it's ideal for many.

I had an infested and scraggly example of the same plant, so emulating a deer myself I cut it back to within 2 inches of the ground in early April. It's resprouting, but not nearly as quickly as some weedier bushes, such as Lonicera (bush honeysuckle). But as the opposite of weedy, slow-growing bushes eventually tend to look the prettiest (and to need the least pruning).

Thanks for IDing the mystery plant. It seems that it should have had many more small wiry branches, at least the Spirea we had did.

We had a yellow variegated Euonymus, actually several that the previous owner had planted but it was covered with scale insects which were difficult to eradicate because they were mostly under the leaves so I just got rid of the plants after a year trying to eliminate the pests. Watch out for scales, they are extremely difficult to eradicate.

My quite overgrown 'Silver Queen' or similar E. fortunei was heavily infested with scale on almost all branches. I cut it to within 2" of the ground on April 3, and now it has perhaps 4" high sprouts coming up. I have as yet seen no sign of scale, but I should spray Neem or insecticidal soap soon, while any remaining scale are still in their spring active phase.