Plugs of Poop and Hosta

I have a large row of well-established Hostas, and had known since moving here last year that I would be dividing many of them this May. Except for a few times when I wanted to totally remove a perennial from an unsuitable place, I don’t think I have ever divided one in the classic fashion, by lifting it out of the ground, cutting it up, and putting the pieces back in amended ground. Instead, I have used a smaller shovel to cut individual portions off from the established perennial, like cutting pieces off a pie. This method also allows me (pretty much requires me, actually) to move the center of the perennial a few inches in whichever direction is less crowded.

I am always up for labor-saving techniques and experimentation, and I have considered using a bulb planter to do this work. But I hadn’t gotten around to it, or perhaps dared to do it, until I saw a “reader tip” in Garden Gate Magazine this spring, which said the technique worked for Hosta, albeit with the claim that it was most suitable for fall, not for spring divisions. The primary advantage of this technique is that the cylinders of plant fit neatly into holes cut in the ground with the same tool, meaning less time getting pieces to fit, moving loose soil around, and cleaning up. (On the other had, if the plants’ destination is hard, root-filled ground, you should probably do some digging there anyway to prepare the bed before drilling your planting hole.)

For plants in softer ground, the hand-held type of bulb planter works well. But for some of the plants the earth or roots were too hard, and I used a heavier, sharper, foot-pushed bulb tool designed for use in turf.

This plug-planting was fairly easy to do in early May, when the Hostas were just coming up. You carefully orient two or three buds into the bulb planter, then push or twist down as far as you can, until you get through the crown and root layer, and lift up a plug of Hosta roots, soil and sprout. 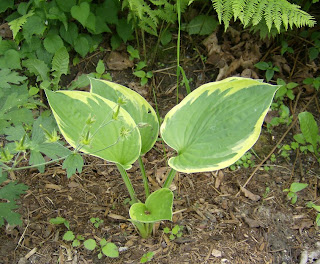 Naturally, the Hosta isn’t huge, but it is healthily established, the moving process was easy, and its removal subtracted hardly a whit from the parent plant. (My hand-held planter is 2.5 inches in diameter at the bottom cutting edge, and the foot-pushed planter is 2.25 inches.)

A related idea came to me a couple days ago. I had bought some Delphinium and Lupinus at the North Adams Garden Club plant sale on May 19. Rushing to put them in to suitable-looking empty spots in my raised bed, I did not notice until later that in some of those locations, the sandy soil lacking in humus drained and dried out very quickly. I didn’t want to be wedded to daily watering, and I didn’t want to traumatize the plants – or overtax myself! – by lifting them and working extensively on their beds, but I wanted to do something more extensive than just a top-dressing or mulch. So last week I brought around a container of composted cow manure, and used my bulb tool to remove plugs of low-organic soil, and replace them with plugs of manure. Since the plants had been in the ground less than a month, I was pretty confident I could skirt their roots by keeping a half inch beyond their original pot diameter, and that a few removed roots wouldn’t matter much. I put 3 or 4 plugs of poop around each plant, then watered. Here is a photo of a Delphinium with two holes of bad soil removed, and one already filled with manure: 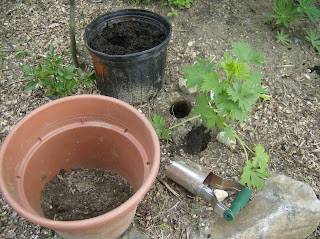 Naturally, some top-dressing and mulch would also be a good followup. I don’t think I have to fear burning or otherwise harming the plants if they come in contact with pure manure (it is composted, and claims just 0.5/0.5/0.5 NPK percentages). One concern is whether worms or water flow will sufficiently mix the manure or its soluble nutrients with the adjacent soil.

There’s another experiment I will try some day, when I get a proper subject: a somewhat exhausted “donut-shaped” perennial that I have no particular need to propagate, and which has sufficient elbow room all around. Instead of dividing, I will just drill out the middle hole of weak old plant with one or more stabs with a bulb planter, and then fill the hole with composted manure. Treating the plant thus in situ should be easy and without risk of shocking the plant.

Posted by DWPittelli at 9:23 AM

I tried to copy and paste a pic. for you but it is a no go on blogger commentz....Zo, come on over and visit me and then lets talk!