A Tale Of Two Invasives

The Japanese, or so I have read, believe that you can make a fine garden out of a wild piece of land with nothing but a cutting tool, such as a pair of pruning shears. Naturally, you can use them to kill or control the existing plants, but cannot add any new plants.

By this method it takes a couple decades to achieve anything of true merit. At that point, you are going to have one of those minimalist gardens with a handful of species, including a lot of moss, some rock, and if you’re lucky perhaps one flowering plant providing a week or two of non-green color. These are serene places for tea ceremonies and meditation. But I don’t have that level of maturity or patience, nor do I expect it from my pre-school children. So I am not trying to emulate a “knife-only” garden.

But I am trying to discover what has been growing in my new (to me) garden, and what is coming back from root or seed now that I have removed two fairly large forest trees. And I do aim to give existing plants every chance to prove their merits, to use the knife judiciously.

As the Japanese well know, one of the best plants to keep in place as a groundcover in a shady setting is moss. I “mow” the weeds, or unwanted plants, off of it with a pair of scissors, to give the moss the upper hand. Pulling out the weeds would not work here, as the delicate moss would be ripped up with root-held chunks of soil. Of course, as with grass mowing, I will have to do this more than once, but unlike grass, moss mowing will be needed less frequently as competing plants are killed off with repeated cutting down to the dirt – if I do it frequently enough. 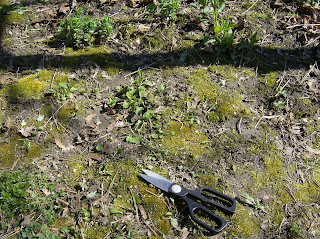 Here you can see the results of an almost-finished first-time cutting, with bare patches evident and some loose detritus remaining. While sitting on my butt doing this I get to pick and choose which of the other plants get to survive unscathed; I have left an unknown succulent (probably a Sedum) at the top of the photo, as well as the Eranthis (blogged on earlier when it was in flower) at right.

Naturally, in a wild place you’re going to see more brambles than Trilliums, and more wildings than choice cultivated plants. In this next photo, you can see two of the “worst” invasives. 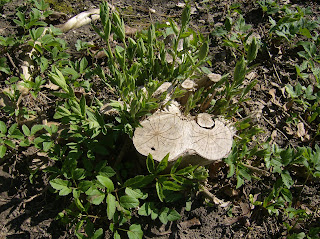 The stump is the remains of a large bush I cut down last fall. It is probably a bush honeysuckle, one of several Lonicera species which is taking over our woods. It took a long time for me to tentatively identify these (I have several) because they are “old-fashioned” plants which were sold 100 years ago when my house was built, but are not widely available now. Indeed, it is not PC to plant such a bush, and environmentalists sometimes hold invasives cleanups, where they cut them down in the woods and paint their stumps with Roundup (imagine, environmentalists with Roundup!)

Like most bushes with red berries (e.g. Euonymus alatus, Berberis), Lonicera attracts birds, which eat the berries and then poop out fertile seeds all over the place. These shrubs have taken over many lightly wooded areas, shading out and outcompeting native flora.

Personally, I think a vigorous bush with nice-smelling (albeit not very showy) flowers, nectar for pollinators and berries for birds, has pulled its weight in the grand scheme of things. And so I am going to let some of my Lonicera live, at least for a while. Some I have pruned modestly. Some I have killed. Others, like this one which was pushing up against a handsome native dogwood (Cornus alternifolia), I cut to the ground last fall, expecting it to come back. Here we see that it is already re-sprouting strongly. I will probably use selective pruning each year to keep it within bounds.

Around the bush is a groundcover of the same color. This is the infamous Aegopodium podagraria. A lot of people have planted this in its variegated form, and lived to regret it. It spreads by rhizomes and seeds. This nonvariegated form is even more invasive. It will either be stopped forcibly, or it will take over every inch of garden earth.

It is a lot more work to clear out a small, herbaceous plant like this than a woody plant like a shrub, which grows relatively slowly and can’t propagate until it is of quite a noticeable size. I have been pulling up the Aegopodium, but it breaks off at the surface, leaving a thick nodule right below the soil surface. So the scissors are just as effective. I have also been painting its leaves with Roundup, to modest effect after a week, and may use a tarp or newspapers and mulch on larger areas (it fills a circle about 20 feet across, not counting a vanguard which has crossed a path to infest a patch of daylily). 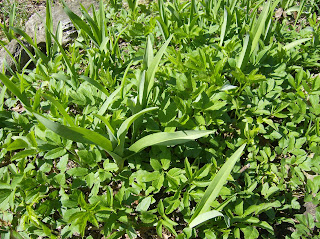 Getting it all will likely take two growing seasons, even if I remain super-diligent.

But for this year at least, I have made my peace with the Lonicera. I am open to the suggestion that it is wrong for me to allow a red-berried foreign invasive such as bush honeysuckle to remain in my garden. But if we are obligated to remove plants for this reason, I don’t see how I can destroy the Lonicera without also taking action against the giant Norway Maple which shades almost my entire house, but which has left perhaps 10,000 seedlings in my yard this year.