Should You Buy Shrubs At The Supermarket?

The local supermarket in Adams (Big Y) has put out a display of shrubs for sale. The specimens look healthy, and prices are right, at $13 for a 2-gallon pot. However, I expect that most of these plants will not meet their buyers’ expectations. Why is that?

First, most of the plants are in the Ericaceae, the heather family, and will only be healthy in acid soil. These include several Rhododendrons and azaleas, and a couple cultivars of Pieris (as seen in this picture), also known as Andromeda. However, most everyone’s soil around here rests on limestone bedrock, and is mixed with limestone pebbles. As such, it is almost certain to be alkaline, not acid, except in raised beds built up with peat moss, in places with deep humus-rich forest soil, or where people have used acidifying chemicals, such as sulfur or Holly-tone fertilizer.

This is not a mere hypothetical problem. Compared to those in the suburbs of Boston, Rhododendrons and their acid-loving cousins almost always look sickly in this region, and even some that are apparently healthy often have the subtle distress signs of chlorosis, such as leaves yellowing, with green veins (second picture, taken in North Adams). 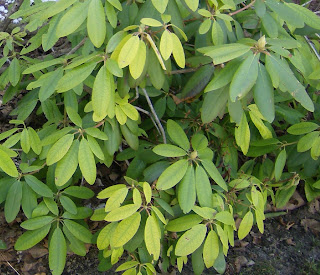 Another plant with a large display at the Big Y (Hydrangea ‘Endless Summer’) is shown on its label with bright blue flowers, but it will probably be pink (and perhaps chlorotic) in most people’s gardens, again because the soil is not acid. The fine print on the Hydrangea label does state this color effect, but for the rest of the acid-loving plants, only some of the labels inform us that the plant needs acid soil, and some don’t.

Besides, the Big Y is not a specialty plant nursery. It is an impulse purchase point for people who are generally not very garden-knowledgeable. It is not reasonable to expect this broader public to know whether their soil has a high (alkaline) pH. Even if everyone did know this, it still makes no sense to offer a limited display of plants, the majority of which are unsuitable for the local conditions.

The other big problem is some of the plants are of questionable hardiness for our Zone 5 climate. To go back to ‘Endless Summer’ – this is a Hydrangea macrophylla cultivar. Most H. macrophyllas are rated hardy only to Zone 6. While there is some controversy on the matter, this cultivar is probably bud hardy in protected (nonwindy) areas in warmer parts of zone 5. But there aren’t a lot of places around here which don’t get much wind. (The cold wind is the other reason Rhododendron and Pieris often suffer hereabouts.)

The plant will survive our winters, but it will likely have significant die-back – including most of its overwintering flower buds – in many if not most winters. Yet this shrub’s label simply says that it’s hardy in Zone 4. It also claims that the plant will bloom throughout the summer, first on its old wood (i.e., on overwintered flower buds), and then on new wood. This reblooming feature means it should in fact bloom here in late summer on its new wood, but again, the earlier blooming on old wood is highly questionable in a zone 5 garden. (Because of dieback, it also probably won’t attain its expected size of 4 to 6 feet.)

Finally, one of the plants was a cute “Alberta Spruce.” Generally this variety of the white spruce species (Picea glauca var. albertiana) is sold in its ‘dwarf’ form. People are often surprised that these dwarves eventually grow to 15 feet tall. But in this case, the plant isn’t a dwarf at all. It is expected to grow up to 60 feet tall and 20 feet wide. Fortunately, this fact is on the plant’s label, but I question whether it makes sense to include such a tree, because most people are not out making impulse purchases of 60-foot forest trees, and at least some people who buy this plant probably aren’t going to notice that that’s what they’ve got, especially given its name and similar appearance to the popular dwarf spruces. Of course, it is a lot quicker and cheaper to grow a non-dwarf spruce to the 2-gallon size than it would be to use a real dwarf cultivar.

I don’t expect the Big Y to have dedicated shrub buyers, but you’d think they could find somebody in the headquarters who has done some gardening and has given some thought to what grows in the area. It’s not like they’re down in or something.

Thank you so much for all the plant info, not just in this post but it others as well. I am a novice gardner with (believe it or not) acidic soil! So my rhodies do okay, except for the excessive wind, but a lot of local plants do not do well for me. Plus the problem of a neighbor who owns the treeline between our property, and his 60' tall white pines shade my lot, which eliminates most sun-loving plants.

But it is great to get truly local info. Thanks again.

DW....I had a black thumb question that I think you answered for me in your post. I have a couple of rose bushes started from stump cuts that were doing just great even had a bud. But being mister know-it-all, el plant-o-man, one with nature, I decided to hardy them up a bit and put them outside this morning for a breath of fresh air. Well you guessed it...They look like I have slit their thr oats and doomed them to death! Wiltage has set in and I think I killed them. The sun is hot enough but was it the cool wind that did them in? Should I bring them in or just give them a descent burial?

DW...Just me again, the black thumbed pest...I have a nice, well almost nice, well OK a living Rhododendron that has defied all my attempts to knock it off (not intentionaly). I spread a nice blancket of pine needles around the base which in turn gives the soil an acid Ph. Am I doing good?

1) I'd bring them in ASAP. Water if the soil is dry. Cross fingers. Even if they lose their leaves, they are likely to make a second leafing attempt (roses are hardy perennials).

Next time you put plants out to harden them off, put them in high shade (little or no direct sun, but with bright sky in their "view") for the first few days. Bring in at night at first if it's to get below 40F or so (even higher if it's a tropical like a Coleus).

Pine needles are reported to lower pH somewhat, but I'd use something stronger if you suspect you still have alkaline soil, such as Holly-Tone or sulphur or other acidifier.

DW....The soil had plenty of H2O, maybe too much?, my black thumb observation concluded that all though the sun was bright and shiney the roses don't want to respond to the photosynthises? Upon reflection...When the plants arrived I thought they were DOA, but I stuck them in some dirt anyway and to my ammazement they actually started to grow. I was under the impression that roses liked lots of sun? DAH...My observations conclude that you are the man....Roses like subduded light, not direct exposure! Silly me! Don't believe everything you believe to be the truth! That's the problem of being an old guy...you rely on burnt out brain cells that like to lie to you and then sit back and have a good chuckel. :~)

Roses do need sun, generally half a day at minimum to bloom. But plants which have been inside need a break-in period to harden them off. It's risky to skip this hardening off period, although you can often get away with it if cloudy and at least occasionally damp weather is predicted for at least 4 days.

I thought when you wrote that you "decided to hardy them up a bit and put them outside this morning for a breath of fresh air" that you put them out in their pots, and thus it would be trivially easy to bring them back out of the sun. If you buried them in the ground in full sun, and digging them back up would thus be another trauma, then you should, if possible, put up some sort of screen or partial shade, such as a piece of trellis made into a "coffee table"-like form over them, or a lawn chair placed to block at least the afternoon sun.

I have done this with one level of a plastic shelving unit from Home Depot, and its 4 plastic pipe feet; from the kind of shelving that goes up 3 or 4 levels and is sold as holding 1,000 pounds. One level with its feet is the size and shape of a coffee table, but its slits let through about half the light. You can also throw a towel, tarp, sheet or something over it if a frost or near frost is predicted (as is the case tonight with a low of 35F. in the report for Adams).

They are still in pots. I did bring them in but now I have to waite for daylight to see what damage was done. One stem, the one with the bud on it, looks like it had a hard night out on the town, it is lying over the edge of the pot, a position I found myself in on several occasions. I think the wind may have snapped the stem. We will see when the sun comes up.