Wake Up! There’s Been A Slaughter Here. 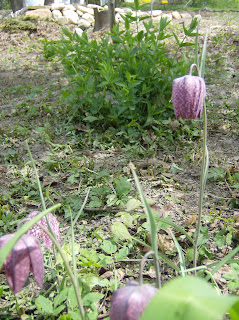 While gardening, I tend to listen to my iPod. As in my car, most of the time I’m listening to the Grateful Dead. But when I’m slaughtering weeds, especially if with my weedwacker, I listen to The Doors. Today I wacked the Aegopodium, as seen in this photo. Of course, that and the earlier Roundup treatment won’t be sufficient to kill it. But it’s been weakened a bit until I cover it with newspapers and mulch, or a hideous blue tarp.

In other news of plant slaughter, last year I cut down two medium-sized trees in this garden. But I had a third tree, a fairly large Norway maple with about a 20” trunk diameter, which was crowding two other trees, and was awkwardly positioned on a steep slope looming over the street and some lilacs.

So yesterday I had some local arborists over. People I play cards with were agreed that I’d get the best price, at least among businesses with insurance and proper safety equipment, from these guys: 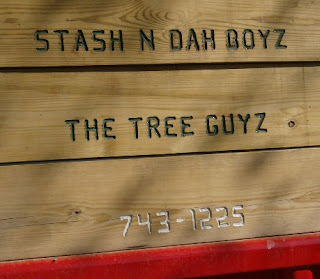 It was pretty impressive how quickly they could climb up, cut down and clean up a hardwood tree. 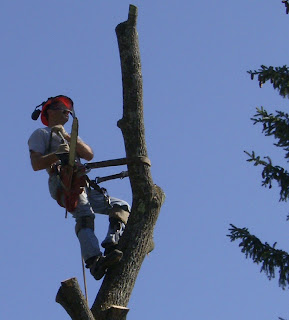 Of course, there are divots in the lawn where pieces of trunk were dropped from high above – that’s inevitable.

In a fairly normal snafu, the bulk of the tree got a bit out of control on the slope. It was stopped by a heavy rope (and 5 guys), but not until damaging a lilac by bending it to the ground. I lopped off the larger, split trunks of the lilac today, leaving several younger canes; this pruning might have been a good idea anyway. 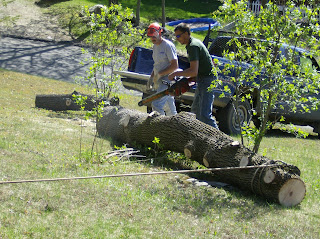 Here you see the difference between one of their saws and my little (16”) McCulloch, which has almost exactly half the engine displacement. 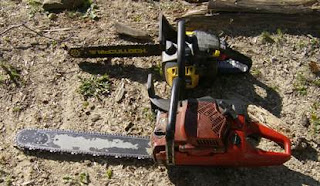 I can’t imagine using such a large saw while up in a tree. Size apparently isn’t the only difference. As the climbing guy explained to me, professional and home-use saws differ subtly in the construction of their chains, such that an amateur who buys a professional saw is apt to have it bite and kick into them, sometimes with catastrophic injury. I could not fathom exactly what advantage this saw blade of death had for him.

ROUNDUP !!!! You use ROUNDUP ??? Why don't you just spread Nuclear Waste on your lawn! Are you insane? Do you know what is in Roundup, some of the most caustic, earth polluting, animal killing, child poisoning stuff man has ever dreamed up! You surprise me! Get rid of the stuff before you kill off everything living within a five mile radius of your house ---and call hazmat!

On the off chance you are being serious, I will note that, as I remarked in the previous post, environmentalists use roundup to kill invasive species such as bush honeysuckle.

I am open to the possibility that it is highly toxic to man, but I am pretty sure that it is short-lived in the environment, and I'm pretty comfortable with my safety, since I wear rubber gloves while painting it on leaves (I'm neither inhaling it nor getting it on my skin).

Hi DW, I agree with you. Roundup is the least hazardous of herbicides and is the only one most conservationists recommend. You are using it correctly as we do. Unfortunately, it is nearly impossible to not use something that will do some amount of harm. I'd say to choose the least harmful is your best bet. Interesting blog on the tree felling. We've had a huge oak and a tremendous elm (both dead) taken down by arborists and it is surly fun to watch. My husband is skilled with the chainsaw and is always impressed by the professionals. Luckily, we've never had any other trees or shrubs hit like you did. But the fellow did run over a large sedum plant and crushed half of it when backing off the lawn. Don't know what he was doing - there was plenty of room. When he came back to clean up, he took a sissors and cut the other half of the sedum down!! Guess he figured we wouldn't notice.... Those chipper/shredders they have are nothing to sneeze at either. Bye, Alyssa P.S. What is "classical liberal" politics as in your profile? I consider myself "plain old liberal".

Good luck with the Bishop's weed! I luckily dug the three plants I stuck in the ground just last fall. They didn't make much headway during the winter.

We had several trees taken down by a one man tree cutter. He used a very small chainsaw not any bigger than 16" when he was up in the tree. It was a Husqvarna. He had a larger one to cut the trunk but used the small one for most of the work. Why carry something so big when limbing?

I was most impressed when he shoved 24-30" x 6 feet trunk of wild cherry into the shredder. I swear in about 10 seconds or less there was nothing left. Equally impressive was the root grinder. Amazing what one person can do with the right tools. Took me the better part of two days cutting then digging out a 5" caliper trunk japanese maple.

Classical liberalism is closer to libertarianism than to any other commonly-known ideology. See:

Actually I wasn't kidden. You just surprised me, never would have thunk it that you would have reseoted to a lab poison. You could have dug it out by the roots or covered it with a small piece of black plastic or used a little gasoline on it. Yes gasoline! The only problem with gas is that it is long lived and unless you dig up the soil and throw it away or burn it, you will have a dead spot for the entire season. I use gas to kill the weeds in the cracks between the walks, lasts all season but by bext year it is gone. Stop and think about it...it came from the earth as a natural part of oil so you can't say it is an unnatural substance and the small amount that is used certaintly doesn't qualify as a brown field. I wouldn't use it around food plants but for weed control in a flower garden of remote areas it is great.

The bulk of gasoline is indeed a distillation of natural crude oil. However, what you are doing is far worse for the environment than would be use of Roundup. I'm pretty sure it's also illegal.

To say that the "only part" of gasoline that is worse than Roundup is that it is long-lived, is like saying such of land mines or AIDS. The persistence is the problem! Not to mention that many gasoline components are carcinogenic, and others are, yes, man-made.

By your reckoning, Uranium 235 should, to an even greater extent, be seen as a "natural" product, merely separated out from natural minerals by man. I bet it makes a great herbicide too.